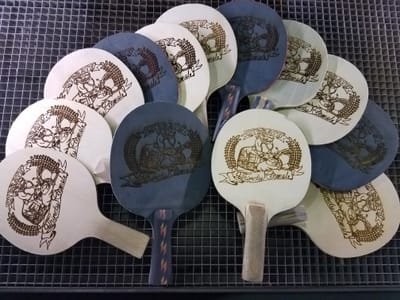 As a veteran-owned and operated company, it’s no surprise that LaserUS had its beginnings in the United States military. While serving, MSgt. David Ebersole became fascinated with engraving after seeing a machine shop engraver in action on base. Soon, David began to engrave items in his free time. From plaques to ping pong paddles, wooden keepsakes, bullet casings, and more, he’s worked on a little bit of everything. The culmination of his efforts led to the founding of LaserUS in January of 2018. Since then, the quality work David has strived to make LaserUS known for has appeared nationwide, from firehouses in California to VFW outposts in Virginia.

“I come from a family of artisans, gunsmiths, and engravers, some of which were also veterans. When I engrave something, I feel like I’m walking on the same path, and I’m proud of that. I’ve been at this for five years now and I want you to know that when I say LaserUS will deliver ‘Quality Metal Etchings and Engravings’, you will get exactly that and nothing less.”
-Master Sergeant David Ebersole, Founder, LaserUS